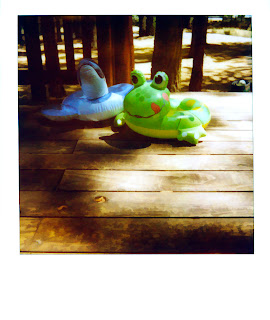 It occurred to me today ... (I'm going to gripe about Polaroid right now), that little by little we are losing the very elements that we have all taken for granted. I fell in love with all things Polaroid and began photographing everything I could with my SX70 camera. Then, Time Zero film disappeared . Evidently the machines that Polaroid used to produce the film failed, so they abandoned the film. With really no regrets to the many artists, world wide who were using this film... Poof... it was gone! Now as you all know, we are losing all instant film from Polaroid. I'm so sad and sort of at a loss as to how I will replace this part of my artistic workflow. Am I alone on this? Anybody else? There really aren't any plugins, or actions in Photoshop that even get anywhere close to replicating the SX 70 magic or the emulsion lift or transfer. So sad. Does anyone know anything about Fuji instant film? Anyone tried it?
Posted by Bohemiagirl at 1:56 PM

My mission was to determine out} if roulette sellers at a sure higher-limit on line casino had been purposely overpaying sure customers on successful outcomes. Yes, bet365 Wildz provides a number of Live Casino Roulette games powered by quantity one} line-up of trade providers. Many Roulette games additionally provide the alternative to save lots of|to avoid wasting} a betting mixture so as to to} place this wager a lot quicker in future. To do this, click on on the ‘Special Bets’ icon, then ‘Favourite Bets’ tab, where you’ll in a position to|be capable of|have the ability to} store all of your favourite bets for quick use.